These last days I’ve looked into how the overall picture got planned by mountplanner in a series of objects consisting of a {tag, x, y}, now let’s see how those large objects (features of the landscape) are actually drawn. This will hopefully cover the entire process from the whole picture to a singular stick on it—at least, some paths (mountains with some houses and some trees), assuming others have more or less the same logic.

You see, I am already starting to consider how I’ll sum it all up for publishing: probably the series of daily diary entries as I write them, but also some digestible high-level retelling of the whole picture. Looking into some of the lately rewritten methods with a fresh eye, I still see that it wouldn’t be that digestible for those just wanting a quick overview of the juiciest and the most important… But we’ll see.

Philosophy aside, to the Mount.mountain!

tex, veg and ret are a bit of a mystery, let’s see later. (I also was curious when the defaults are calculated—if it would be like in Python, once calculated on definition, those randomness in height/width would be totally screwed. Fortunately, in JS it is like in Ruby, on every call.)

Now, shallow view on the method shows that it calculates some list of points, and then calls internal function vegetate many times to, probably, fill up the space for the mountain with various features.

On the road, as per habit, a way to screw things up (less appealing than usual…) 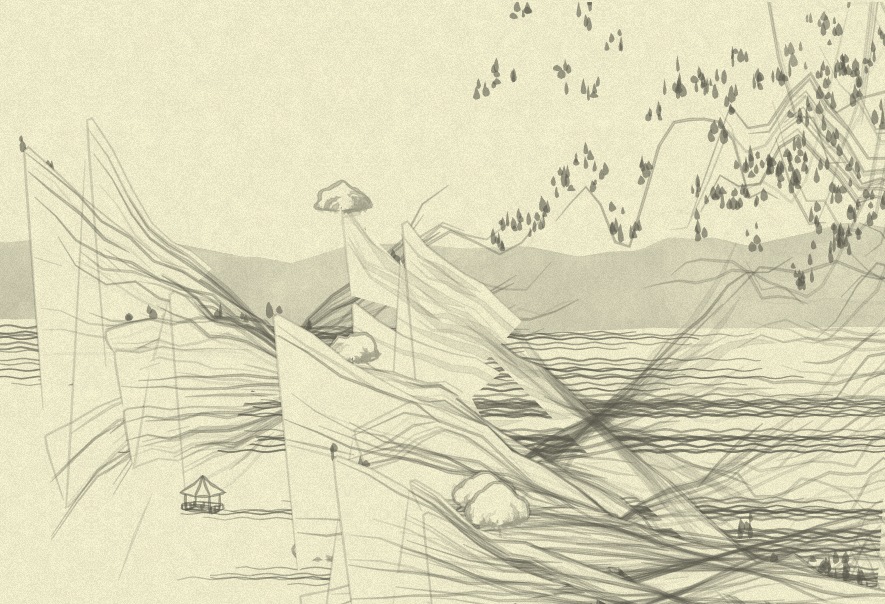 The first working attempt for the point list calculation gives this:

But being bad at math (I used to love trigonometry so much 20 years ago… and now I can’t even for sure say “oh, of course it calculates an angle of that!”) I am still kinda lost in all that. Nevertheless, I am almost sure the names should change somehow: even with my rudimentary trigonometry leftovers, I see that x and y seem to be some angles, not coordinates.

But I’ll move forward for now, to the vegetate method and further—and then we’ll see where it all leads in general.

That’s what I did to vegetate:

So, it receives three functions:

It then filters through the grid twice with growthRule, then proofRule, and then draws! Simple.

In general, “we’ll see” is the mood of the day: once I’ll reiterate on all the real usages of this vegetate, I expect at least some amount of insights into the way the filtering/deciding what to draw is performed.